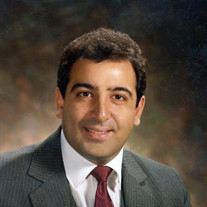 Brian Wesley Gossan, 63, of Delray Beach, Florida passed away peacefully on June 24th, 2017 surrounded by family after a long battle with Multiple Sclerosis. Brian was born February 18th, 1954 in Escanaba, MI to Dr. Alfred A. Gossan Sr., and Virginia Abraham Gossan. He is survived by his wife of 34 years, Janice Diane Gossan, daughter Kahla Brijan Gossan of Indianapolis, IN; sons Kristopher Ryan Gossan of Holland, MI, and Philip Jemayel (Rachel) Gossan of Chicago, IL; siblings Alfred Anthony Gossan Jr (Jan) of Louisville, KY, Marleigh Virginia Gossan of Loudon, TN, & Jeffrey Allen Gossan of Gulf Shores, AL; as well as numerous cousins, nieces, and nephews close to him. He was preceded in death by his mother Virginia Abraham Gossan, and his parents-in-law, Rev. Herbert Henry Phillips and Mildred Grace Phillips. Brian was a lover of people, life, and the great outdoors. He enjoyed swimming, skiing, and helping others. He spent most of his life spreading the word of God through his ministries, domestically and abroad. Brian was employed as a top-performing real estate agent before illness struck. Brian was an avid water lover and spent most of his weekends on or near the waters of Lake Michigan enjoying life with family and friends. A special thank you to Home Care Resources, Dr. Grene, and Vitas Hospice for their loving care and support. A celebration of life will be held at Farmer’s Table (Grand Ballroom)- 1901 N. Military Trail, Boca Raton, Florida at 11am on Wednesday, June 28th, 2017. Flowers and correspondence can be sent to: Janice Gossan 15217 Lakes of Delray Blvd., #C88 Delray Beach, FL 33484 In lieu of flowers, a donation can be made to the MS Society or a charity of your choosing in memory of Brian.

The family of Mr. Brian Gossan created this Life Tributes page to make it easy to share your memories.

Send flowers to the Gossan family.