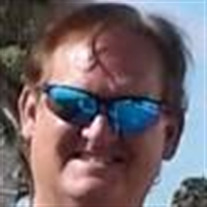 After a lifetime of chasing adventure and discovery, Christopher Raymond Staples peacefully passed away early in the morning of Monday, September 9, 2019. He was 50 years old. A celebration of his life will take place at Clark Beach in Palm Beach on Saturday, September 21st at 8:30am. There will a paddle out by his cousin Bryan DeBay with his nieces and nephews participating and his friends and family singing and dancing and praising. Chris was endowed with many gifts and talents. He was a brilliant artist from a very early age. His works included photography, pencil drawings, and painting across many genres: landscape, surf action, sea life, spiritual metaphor, and scientific interpretation. He also taught himself guitar as a teenager. In addition to his love of the arts, he also was an avid athlete. His first love was surfing, which he pursued for nearly four decades. His football career was cut short by a devastating ankle injury in high school. But he did participate in basketball in a variety of school teams, community leagues, and intense playground showdowns. He also would war frequently with his brother in the backyard, where he would routinely knock down trees from beyond the jungle gym and over the wire bringing cable to the house. He worked out in the gym, skateboarded, rode his bike for miles, mastered racquetball and tennis, hiked, and fished in just about every waterway he could find. What was most recognized by those around him, though, was his brilliant mind. A graduate of Florida Atlantic University in 1991 with a BS in Oceanic Chemistry, he studied and did graduate work at University of California at Irvine, University of Wisconsin, and the University of Georgia - where he earned his PhD in bio-inorganic chemistry. He also worked with NASA’s astrobiology unit at Arizona State University and presented discoveries in iron sulfur bonds at International conferences. He was a deep thinker, a curious spirit, and a dedicated explorer. He is mourned by his brother David and sister-in-law Heather and their children Josiah, Natalie, and Gabe; his sister Holly and her son Toby, who Chris loved like a son; his Aunt Dee and Uncle Mike who provided love and care until Chris said his last; and his Uncles George, Jim, and Bill, his Aunts Kathy, Mary Jane, and Katherine, and his many cousins

After a lifetime of chasing adventure and discovery, Christopher Raymond Staples peacefully passed away early in the morning of Monday, September 9, 2019. He was 50 years old. A celebration of his life will take place at Clark Beach in Palm... View Obituary & Service Information

The family of Mr. Christopher R Staples created this Life Tributes page to make it easy to share your memories.

After a lifetime of chasing adventure and discovery, Christopher...

Send flowers to the Staples family.