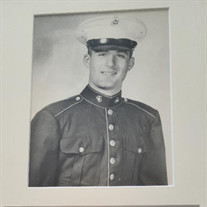 Remembering Frank Metersky Frank Metersky, the foremost advocate of recovering the remains of US military personnel left behind in North Korea during the Korean War, has joined his comrades in arms. Frank recently passed away at the age of 88. He is survived by his wife Barbara, sisters Jo Jo and Marlene and many nieces and nephews. A successful businessman and Korean War veteran, he devoted thirty years to urging the US government to send Central Identification Laboratory, Hawaii (CILHI) teams into North Korea to recover the remains of some 8,000 Missing in Action (MIA) US personnel from the Korean War. Frank patiently and persistently pressed the White House, Pentagon, State Department, Congress and North Korea’s United Nations delegation to initiate such an endeavor. He acted solely on his own initiative, paid all his expenses and sought nothing for himself. Frank’s motivation was purely personal. He was a Marine rifleman who survived the Battle of the Chosin Reservoir when some 120,000 Chinese People’s Liberation Army soldiers stealthily surrounded 30,000 UN troops, mostly US Marines, in North Korea’s northeast corner just as a blizzard buried the area in deep snow and plunged temperatures below zero. Amazingly the Marines fought their way to safety but had to leave behind the frozen remains of their deceased comrades in arms. After being withdrawn to the Korean Peninsula’s southern tip he volunteered for a second combat tour and returned to the front line. Frank insisted that the US government was obligated to locate and to return the MIA’s remains to their families. Success came in 1995 when the United States and North Korean armies initiated Joint Recovery Operations (JRO). Over the next decade 208 sets of remains were recovered and sent to CILHI for identification and return to their families. But in 2005 Defense Secretary Rumsfeld ended the project. Frank only intensified his effort to restart the program, but to no avail. Yet the JRO program remains the most successful and longest enduring example of US-North Korea cooperation. Without Frank’s efforts it would never have occurred. I am proud to have worked with Frank as the State Department’s North Korea Affairs officer who helped negotiate the JRO program’s initiation. Frank was a humble and gentle friend who exemplified the best qualities of what it means to be an American. Mrs. Barbara Metersky and C. Kenneth Quinones, Ph.D. Foreign Service Officer, Retired

Remembering Frank Metersky Frank Metersky, the foremost advocate of recovering the remains of US military personnel left behind in North Korea during the Korean War, has joined his... View Obituary & Service Information

The family of Mr. Frank Metersky created this Life Tributes page to make it easy to share your memories.

Send flowers to the Metersky family.