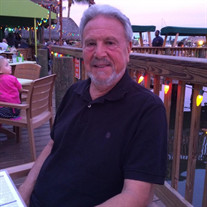 Fred Lyman – Born July 7, 1944 in Brooklyn, NY, passed away suddenly on Wednesday, May 5, 2021 in Delray Beach, Florida at the age of 76. Fred was a loving and generous husband to his wife Toni Lyman née Hoffman of 41 years , a doting father to Stacey DiNicola, Karen Burghardt (Brendan Burghardt), Scott Lyman (Chloe McCarthy), and Janna Vlad (Chase Vlad). Fred adored his seven grandchildren Joshua, Hannah, Sam, Jacob, Emma, Noah, and Ezekiel. Over the course of his marriage, he was a proud owner of 18 different furry friends. One of Fred’s first jobs was in the music industry for Sid Bernstein. From there, he developed a great love for Rock & Roll with an emphasis on the 50’s. Fred was a successful businessman in the jewelry industry, beginning his career at Zales where he met his wife Toni. He continued working as a Senior Executive at Service Merchandise and retired at a young age. Fred was a diehard Brooklyn Dodgers fan and grew up near Ebbets field. When the Dodgers left New York, his loyalty transferred to the New York Mets. Fred was an avid baseball enthusiast who was fortunate to visit as many baseball stadiums across the country as he could with his family. Family travel was everything to Fred and It brought him great joy…whether it was taking his family on trips around the world or by picking up/dropping off family members at the airport. One of his most memorable family trips was an Alaskan cruise where he renewed his vows with his wife Toni on their 35th wedding anniversary. Everyone laughed at Fred’s hilarious sense of humor and he enjoyed making friends wherever he went. There wasn’t a new gadget that Fred wasn’t aware of or didn’t own. We would like to mention other people who were special in his life including his first wife Florence Lyman née Ginsberg, Michael DiNicola, sister- in- law Jaime Corallo, brother- in- law Perry Hoffman, cousin Michelle Roseman, and friends Howie Dorn, Leo & Melissa Sinisi, Ruth & Arnold Silverman. In lieu of flowers, donations can be made to the Planned Pethood International Organization (plannedpethoodinternational.org) or the American Heart Association (heart.org). The family welcomes any memories or stories you wish to share.

The family of Mr. Fred Lyman created this Life Tributes page to make it easy to share your memories.

Send flowers to the Lyman family.