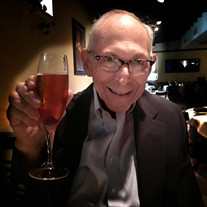 Jack J. Klein, M.D, of Jamison, PA died on Saturday, March 10, 2018, at his vacation home in Delray Beach, Florida, after a long illness. He was 81. Born on December 7, 1936 in Pittsburgh, PA, he lived most of his adult life in the Delaware Valley. He attended Geneva College in Beaver Falls, PA and graduated from Thomas Jeﬀerson College of Medicine in Philadelphia in 1961. After internship and residency, he served two years in the Air Force as chief of medicine at the USAF Hospital, Tinker Air Force Base, Oklahoma. After completing a Fellowship in Cardiology at Hahnemann Medical College in Philadelphia in 1968, he began private practice in Cherry Hill, NJ. He was an attending cardiologist on the staﬀs of Our Lady of Lourdes Medical Center and Cooper University Medical Center in Camden, Kennedy Memorial Hospitals in Cherry Hill and Washington Township, and Elmer Hospital in Elmer, NJ where he was Chief of Medicine from 1970 through 1996. He established a group practice in 1972 which came to be known as Cardiovascular Associates of the Delaware Valley in 1994. At the time of his retirement in 1999, it had become one of the largest Cardiology group practices in South Jersey."Jack’s zest for life was known to all. His intellectual curiosity and love for reading made for many lively discussions with friends. He was an excellent cook, a model train enthusiast, and had a passion for antique cars. He was a member of the AACA and other auto clubs and took great pride in his award winning antique car collection."Although his achievements and interests were many, caring for his family was always his ﬁrst priority. He was a devoted husband, supportive, proud father, and loving grandfather. His kindness and laughter will be greatly missed by all."Jack is survived by his loving wife of 14 years, Joanne, his children Jill Hull (Jim), Jonathan Klein, Adam Klein (Mercy), Allison Small (Howard), step daughter Jennifer Rutledge (Brian), ten grandchildren and many friends and colleagues. Funeral services will be private."Donations in memory of Jack can be made to the American Heart Association (heart.org), or in support of pancreatic cancer SURGICAL research at Jeﬀerson. Checks can be made payable to Jeﬀerson and mailed to: Oﬃce of Institutional Advancement, 125 S. 9th Street, Suite 700, Philadelphia, PA 19107 or donate online: Advancement.Jeﬀerson.edu/memorialgiving.

Jack J. Klein, M.D, of Jamison, PA died on Saturday, March 10, 2018, at his vacation home in Delray Beach, Florida, after a long illness. He was 81. Born on December 7, 1936 in Pittsburgh, PA, he lived most of his adult life in the Delaware... View Obituary & Service Information

The family of Dr. Jack J. Klein created this Life Tributes page to make it easy to share your memories.

Send flowers to the Klein family.