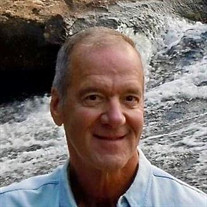 Mark R. Roodvoets passed away peacefully on May 12, 2020 with family in Wellington, Florida. Libby Roodvoets-Brown and their son, Connor Roodvoets, who cared for him in the waning months of his life, were by his side when he passed. Mark was a resident of Duncan, South Carolina and bravely battled cancer for several years before deciding to spend his final months in the Florida sunshine. He was 70 years old. Mark was born in Grand Rapids, Michigan on December 14, 1949 to Robert K. and Brenda J. (Bergers) Roodvoets. He is survived by his son, Connor, his brother, Robert, who lives in Woodfuff, and sister, Lisa Cracknell, who lives in Mill Valley, California. Mark graduated from the University of Michigan in 1972 with a BS in Chemistry. After graduation, he joined Firestone Tire and Rubber Company in Akron, Ohio. While working for Firestone, he earned his MBA from Kent State University and his MS in Polymer Science from the University of Akron. Mark still holds several patents for work he did with Firestone. Mark married Elizabeth (Libby) in St. Thomas, USVI in 1989, and they moved to the Spartanburg area the following year. Most recently, Mark worked for Indorama Ventures, a global manufacturer of polyethylene, polypropylene and related plastics, as the R&D Manager at their Spartanburg facility. Mark was a true adventurer. He was a licensed pilot, a skydiver, a scuba diver, an avid cyclist, and loved riding his Harley through the back roads of the Carolinas. Mark and Connor enjoyed traveling and spent every summer visiting such places as Costa Rica, Alaska and Hawaii. They also enjoyed hiking through many of our nation’s parks and trails. Mark leaves behind many friends and family, who will remember his intellectual curiosity, sense of humor and passion for the outdoors. Mark’s arrangements were handled by A Cremation Service of the Palm Beaches. Their interactive obituary services can be accessed at “acremationservice.net”. A celebration of his life is planned for next month in Spartanburg.

Mark R. Roodvoets passed away peacefully on May 12, 2020 with family in Wellington, Florida. Libby Roodvoets-Brown and their son, Connor Roodvoets, who cared for him in the waning months of his life, were by his side when he passed. Mark was... View Obituary & Service Information

The family of Mark R Roodvoets created this Life Tributes page to make it easy to share your memories.

Send flowers to the Roodvoets family.