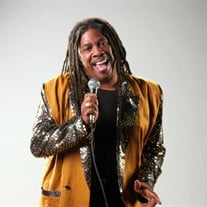 Oscar Davis On Monday July 9, 2019, Oscar Davis, Jr. passed away unexpectedly in his home in Delray Beach, Florida, at the age of 69. Oscar was born on October 15, 1949, in Brooklyn, NY to Ella Mae Wilson and Oscar Davis, Sr. In 1987, Oscar completed his degree in Security Management from Interboro Institute in New York City, where he met his love of a life-time and mother of his three daughters, Noralyn Masselink. Oscar was an entertainer and had a deep passion for music. He sang in numerous bands and performed across the United States and Europe, bringing joy with his voice. His specialty was Old School R&B, but as his business card noted, he would sing anything. Throughout his decades-long singing career, Oscar participated in the Los Angeles Quincy Jones Workshop, toured throughout Europe with the Max Greger Orchestra, and recorded several albums with his charismatic and dedicated musician friends. The highlight of his I-90 tour in 2013 was sitting on Jay Leno’s couch. After his retirement, he continued to entertain in Delray Beach, singing at parties, restaurants, and nightclubs, but his favorite performances were right from the speakers in the trunk of his 1959 Chevrolet Impala on the Atlantic Avenue beachfront. During his 22-year residency in Cortland, NY in the years prior, Oscar worked at SUNY Cortland and St. Mary’s Church and was a beloved bus driver for the Cortland and Ithaca School Districts. His pride and joy were his three daughters: Dr. Emmalon Davis, Professor of Philosophy at University of Michigan, Mrs. Eena Wright, 3rd Grade Teacher at Grand Rapids Christian Schools, and Miss Endira Davis, Certified Medical Assistant. Along with his girls, Oscar is survived by his sister, Evelyn Hargrove, his brother, William Davis, and many loving aunts, uncles, cousins, nieces, and nephews. As per Oscar’s wishes, no funeral service will be held. Instead, his musician friends will pay tribute to him by pursuing their own musical dreams, acknowledging in their own performances Oscar’s life’s work as a musician. His middle daughter will be hosting an intimate celebration of life at her home in Michigan. In lieu of flowers, the family asks for any donations to offset the financial burden of an out-of-state death to be sent to Endira Davis at 3745 Lyncourt Drive, Cortland, NY 13045. Oscar was known for his beautiful dreadlocks, big smile, infectious laugh, dynamic singing voice, and his white and turquoise classic Impala. Above all, however, was his abiding love for his Lord and Savior. Oscar always thanked God for Jesus; the family takes comfort knowing that Oscar is now singing for Him in paradise.

The family of Mr Oscar Davis Jr. created this Life Tributes page to make it easy to share your memories.

Send flowers to the Davis family.