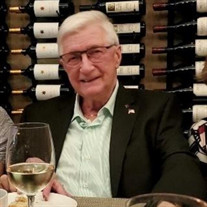 Robert Daniel Renkevens, Sr. 1939 – 2022 Boynton Beach, FL – Robert D. Renkevens, Sr. (82), adoring husband, beloved Dad, devoted grandfather, brother, uncle and friend passed away peacefully on Wednesday, January 19, 2022. Born and raised in Jersey City, NJ by his parents, the late Herman and Mary (Kaiser) Renkevens where he attended Henry Snyder High School (Class of 1957). After graduation he proudly served his country in the United States Air Force (1958 – 1962) where he tested communication equipment for some of the first U.S. missiles. Bob met the love and light of his life, Carol (Kazista) in 1962 and they were married on October 5, 1963. They started their family in Jersey City, NJ then bought a home together in “the suburbs”, Piscataway NJ where they lived for over 50 years before moving to Boynton Beach, FL in 2018. Upon his discharge from the USAF, Bob was employed by IBM as a Customer Engineer working on key punch systems, and later as a Systems Engineer for over 30 years supporting the first midrange computers. Bob was the ultimate Do-It-Yourselfer before it became popular. He built an addition on his Piscataway home and rarely called a repairman. He always took pride in his home and shared his knowledge with his son, Robert and anyone who asked for help. He served on the Board of Trustees at Our Redeemer Lutheran Church in Fords, NJ for many years and in his retirement, he volunteered with the Middlesex County NJ Office on Aging as a handy-man for senior citizens in his community. When Bob wasn’t building or fixing something, he enjoyed listening to music, dancing, swimming in his pool, playing horseshoes, watching football and TV shows about cars, and faithfully attending church when his health allowed. Surviving are his devoted wife, Carol, children Janine and her husband Robert Shugan of Lake Hopatcong, NJ and Robert and his wife Jennifer (Bainlardi) of Wellington, FL. His 5 grandchildren Eric Shugan, Emily Shugan, Trevor Renkevens, Sianna Renkevens and Caitlin Renkevens know how much their Pop-Pop loved them. Also surviving are his siblings Herman Renkevens and his wife Margaret (Peggy) and Norma McKean (Ben Farina), brother-in-law Ted Kazista (Danielle), Dennis Kazista (JoAnne), late sister-in-law Patricia Kazista, many nieces and nephews who cherished him as a role model, and friends who enjoyed his love and laughter. A memorial service and celebration of life will be planned in March 2022 at Son Life Lutheran Church in Boynton Beach FL, followed by internment of ashes at South Florida National Military Cemetery. Donations in Bob’s memory can be made to Memorial Sloan Kettering Cancer Center https://giving.mskcc.org or the South Florida Food Bank https://feedingsouthflorida.org/.

The family of Mr. Robert Daniel Renkevens Sr. created this Life Tributes page to make it easy to share your memories.

Send flowers to the Renkevens family.