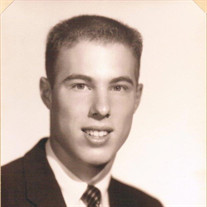 Roderick Michael Mett 1939-2018 It is with great sadness that the family of R. Michael ( Mike ) Mett announce his passing on March 22, 2018 in Port Saint Lucie at the age of 78 after a 4 year battle with melanoma. Born in 1939 in Milwaukee, WI, the only son of Fredrick Paul Mett and Florence (Behling) Mett. Michael grew up to be a man of quiet strength, generosity and fortitude. He attended Milwaukee University Schools where he ran track. His scrapbook contains acceptance letters from MIT, Harvard and Princeton among others. He chose Yale University and graduated cum laude in 1961 with a BA in history and political science and won a history award at commencement. He went on to serve his country in the US Navy as a Lieutenant stationed on the USS GEARING (DD-710) from 1962-1965. He was the ship’s Navigator as well as Legal Officer. On 24 October 1962 the GEARING became the first American ship participating in the Cuban Blockade to intercept a Cuba-bound Russian vessel—the BUCHAREST, out of Odessa. Mike reported that a boarding crew had been assembled but the next command was to stand down and observe. Mike said that there was intense disappointment among the boarding party who were eager for an active role. He was interviewed by TCPalm's Joe Crankshaw in Oct 2012. http://archive.tcpalm.com/news/fifty-years-later-fort-pierce-veteran-remembers-cuban-missile-crisis-ep-381807128-342933412.html He recounts that sailors were heading to town for Liberty when they were called to return to ship. The quick response to being shipped out limited their re-provisioning and Mike was given the job of wandering through the hold to see what there was to eat. He told a story that a supply of canned Brussels sprouts was found from long ago perhaps even WW2. Whenever he told that story he never revealed whether the cans were opened or if they continued to serve as ballast! Michael once said “I believe the legacy of the Cuban missile crisis is that the military and diplomats working together can solve many issues without going to war. I hope that present day leaders know that lesson.” It still rings true. After leaving active duty, Mike joined the Navy reserves as LT. Commander. Michael attained a law degree at the University of Wisconsin in Madison. He was twice elected Milwaukee County Supervisor for Shorewood and the East Side. He was Assistant Wisconsin Attorney General and later was Deputy Securities Commissioner. He ran for nomination to be the Wisconsin Lieutenant Governor at one of the conventions. He also served his community as a Big Brother. Mike moved to Florida in 1980. His time in Florida included investment and real estate development ventures. He helped manage the Petite Marmite restaurant on Worth Avenue and tried to develop a hotel next to the Astronaut Hall of Fame. That plan was thwarted when the presence of a protected bird, the Scrub Jay, was discovered. During that time he was associated with a Reagan administration initiative to print postage stamps for US supported rebel mail service. He returned to Wisconsin for a short period of time in the mid 90s where he was director of Wisconsin Utility Investors an organization that kept investors up to date on matters that would affect their holdings. He then moved to Florida permanently living at Gator Trace in Fort Pierce. Mike had a continued keen interest in politics. He was active in the Republican Party. He always seemed to be on the phone for the Republicans and claimed he had the best phone list in the county! Along with politics, Michael enjoyed fine art, stamp collecting and running a newspaper clipping service. Through this last activity he kept in touch with family, friends and colleagues providing timely information that created lifelong memories and connections of the past to the present. Survivors include his sister, Monica ( Chris ) Swan, half sister, Michelle ( Rob) Voss and half brother, Frederick ( Cindy ) Mett, and half sister Maia Marin, and a nephew, Nathan Skop. He was preceded in death by his father, Frederick Paul Mett; his mother, Florence (Behling) Mett; his sister, Fredericka Skop. “Mikey” will be missed and lovingly remembered as our big brother, confidant and friend. He will be interred at the South Florida National Cemetery with a Military Ceremony in November. If you would be interested in attending click on the Tribute Wall button at the top of the Obituary and leave contact information. Or email [email protected] We will contact you when plans are complete In lieu of flowers, the family requests donations to your favorite charity for Veteran's assistance in Michael's name.

Roderick Michael Mett 1939-2018 It is with great sadness that the family of R. Michael ( Mike ) Mett announce his passing on March 22, 2018 in Port Saint Lucie at the age of 78 after a 4 year battle with melanoma. Born in 1939 in Milwaukee,... View Obituary & Service Information

The family of Roderick Michael Mett created this Life Tributes page to make it easy to share your memories.

It is with great sadness that...

Send flowers to the Mett family.