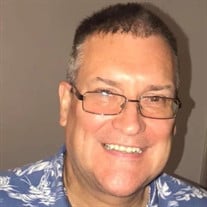 Roger Michael Keroack March 17, 1962 - July 25, 2020 Delray Beach, Florida Roger Michael Keroack, 58, of 1417 NW 26th Avenue, Delray Beach, FL, passed away surrounded by family, following a brief illness, on July 25, 2020. Roger was born in Newport, VT on March 17, 1962, a son of the late Marie (Fugere) and Robert Keroack. Roger moved to Connecticut in his early 20’s to pursue a career as a chef. His talents in the food service ranged from planning and executing weddings at the Trinity Banquet Hall in Terryville, CT to sous-chef at the world famous Griswold Inn in Essex, CT. In addition, Roger spent many years as the Director of Operations at the Crown Supermarket in West Hartford, CT where his catering knowledge was invaluable to the Jewish community. After moving to Florida, He pursued a new career avenue as the Director of Dining Services at Sonata Assisted Living in Boynton Beach, FL where he enjoyed providing meals prepared with love to all of the residents. Roger´s love of food coupled with his creativity and talent was apparent to everyone who knew him. His work gave him great satisfaction because of the joy it brought to others. Wherever Roger was, he quickly became an integral and respected member of his team. He was generous with both his time and talents and was always ready and willing to accommodate the unexpected. Roger touched the lives of all whom he met and he will be dearly missed. Roger is survived by his wife, Lori; his daughters; Jessica Stepp of North Miami Beach, FL and Holly Stepp of Taylors, SC; his grandchildren, Caroline and Ignacio; his sister Rosanne Martin of Berwick, ME and brother Robert Keroack of Hovd City, Mongolia. Information regarding a funeral mass to follow. In lieu of flowers, contributions can be made in memory of Roger Keroack to Life Alliance Organ Recovery Agency (Telephone: 305-243-7622; E-mail: [email protected]).

The family of Mr. Roger M Keroack created this Life Tributes page to make it easy to share your memories.

Send flowers to the Keroack family.