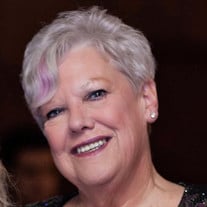 Susan P Feehan, 71, of Boynton Beach, FL, passed away on Sunday, July 28, 2019 in Lake Worth, FL. A Celebration of Life will be 1-4pm, Sunday, August 4, 2019 at Journey’s End Club House in Lake Worth, FL. Please RSVP to [email protected] by August 3rd if you plan to attend as the guard gate will need a list of names. Dress code: Dressy casual with a splash of pink or purple in honor of Susan and her passion for life. Susan chose to be cremated with her “blanky” that her lovely friend made for her, tiara and feathers. Half of her ashes will be spread at sea in Massachusetts and the remainder will be buried with her father, mother and daughter in Beverly, Ma. Date: TBD Susan (Sue) was born in Somerville, Massachusetts to Alma and Roger Perkins on August 29, 1947. She was an only child and grew up in Waltham, MA where her father was in the funeral home business. Her summers were spent along the Annisquam River in Gloucester, MA where her grandparents had a cottage on the river and after her parents were more established, they too bought a home on the river steps away from her grandparents. Sue’s parents owned sailboats through the years and went on many sailing adventures up and down the coast of New England which is when Sue developed her passion for sailing. After graduating from high school, Sue went on to Beverly School of Nursing in Beverly, MA. where she graduated as a Registered Nurse. She soon after met and married Thomas Feehan from Arlington, MA and had two daughters, Lori and Debby. Sue and Tom later divorced allowing Sue to pursue her many adventures on the sea. She grew up on boats since the time she was an infant and at one time was even working toward obtaining her 100-ton Captains License. She was a sailor at heart but crewed aboard Whale watching and Deep-sea fishing vessels as they made their way from Cape Ann in New England down to Key West for the winters. Susan worked as a Registered Nurse for for over 50 years. She worked as a Registered Nurse in some of the most respected hospitals and facilities in the Boston area before moving to Florida in 2001 to be close to her daughters. She retired in 2015 as the supervisor of the Rose team at Hospice of Palm Beach where she was beloved by her coworkers. Driven by her empathy for others, Sue was passionate about continuing to grow as a care giver and healer. She became a Reiki Master and continued her quest to help others through her energy work along with her traditional nursing education and experience. She was described by others as vivacious, funny, loving, supportive, loyal, and passionate. Sue was ‘Nana’ to not only her own grandchildren, but to so many others. Sue is preceded in death by her mother, father, daughter Lori and her cousin Dean. Sue is survived by her daughter Debby, Son in law Al, Grandchildren: Cody Sando, Megan Makara, Summer Giasullo, Carly Michael, and step Grandchildren: Logan and Nick Tafur, Cousins: Charlie Austin, Jimmy Rogers and Judy McAfee The family of Sue wishes to extend our sincere thanks to Dr. James Smith, Joann, Lisa and all of the loving staff at Vitas hospice that that helped care for her in her final weeks as well as all of her loving friends, family and former co workers that surrounded her with love and grace.

The family of Ms. Susan P Feehan created this Life Tributes page to make it easy to share your memories.

Send flowers to the Feehan family.