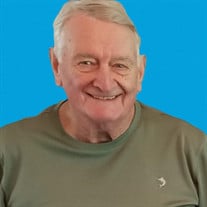 William James O'Brien of Hypoluxo, FL passed away from complications due to pancreatic cancer on Friday, August 20, 2021 at his home in Lakeshore Colony, Hypoluxo, FL. He is survived by his wife Diane (Lafond), daughters Amy Haugen and her husband Philip, Julie Scott and her husband John, granddaughters Izabella Barker and Payton Scott, and grandsons Johnson and Brody Scott, three sisters Susan and husband Billy Pittman of Gloucester, Va, Kathi and her husband Bob Jakubasz of Kingston, NH, Terri and her husband Michael Finn of Stratham, NH and a brother Mark and his wife Cindy of Las Vegas, NV and several nieces and nephews. Bill was born on October 22, 1942 in Haverhill, Massachusetts and attended Sacred Heart School in Bradford and Haverhill High School where he was a stand out football player and a member of the track team. He met his beloved wife of nearly 54 years while working in Burlington, MA. Bill started his career at Avco in Wilmington, MA where he worked as a Quality Engineer. He later worked for Northrop Grumman in El Segundo, CA and Bethpage, NY. He resided with his family in Salem, NH and later Hampton, NH. Bill was an avid tennis player, and enjoyed playing at Cederdale in Bradford, MA, then in Hampton, NH. He was also a member of several softball teams in Haverhill, MA. In 2004, Bill retired from Northrop Grumman and spent the next decade living in both Hampton, NH and Lake Worth, FL. During retirement, he played for Palm Beach Senior Softball Association and Okeeheelee Senior Softball Association. He also played pickleball in his Lakeshore Community. Bill was a devoted Boston Red Sox and New England Patriots fan. A Memorial Mass will be held at St. Mark's Catholic Church, 643 Mark Pl, Boynton Beach, Florida on September 20th, 2021 at 11 a.m. In lieu of flowers, please consider sending donations to the Haverhill YMCA. Mailing address: 81 Winter Street Haverhill, MA 01830.

William James O'Brien of Hypoluxo, FL passed away from complications due to pancreatic cancer on Friday, August 20, 2021 at his home in Lakeshore Colony, Hypoluxo, FL. He is survived by his wife Diane (Lafond), daughters Amy Haugen and her... View Obituary & Service Information

The family of Mr. William James O'Brien created this Life Tributes page to make it easy to share your memories.

William James O&#39;Brien of Hypoluxo, FL passed away from complications...

Send flowers to the O'Brien family.